In China, the level of inequality is high despite dynamic growth linked to economic development. The Gini coefficient, which measures the distribution of income, has been increasing since the 1990s (cf. graph 1). The movement accelerated in particular from 1997, the date of the start of the privatization of state enterprises and the disappearance of the social benefits they provided (housing, access to healthcare, etc…). The country’s integration into globalization only accentuated the deterioration in the distribution of income during the 2000s. Today, the index is at the level of the most unequal OECD countries such as the Spain or Italy.

Raising inequality is primarily the result of faster income growth among the rich rather than stagnant incomes of the poor. China has indeed made great strides in poverty reduction. In the space of thirty years, nearly 1 billion Chinese have risen from the extreme poverty line. The percentage of Chinese living on less than $ 1.90 a day has fallen from almost 70% to 0% today.

The lines of fracture are also and above all geographic. The inequalities between the provinces are particularly striking. Indeed, the regions of the eastern coast have a very high standard of living compared to the rest of the country. The locomotives of the country’s growth, they are the main beneficiaries of the policy of openness. They have attracted most of the direct investment and have become the industrial hub for foreign companies. Metropolises like Beijing or Shanghai have a standard of living equivalent to that of a developed country like the Czech Republic or Portugal (cf. graph 2). The other provinces of the zone such as Zhejiang, Jiangsu and Guangdong have a per capita income close to Poland or Chile. For their part, the Central and Western provinces have a lower standard of living. Gansu, the poorest province in the country, has a relatively higher standard of living than that of the Philippines or Indonesia. 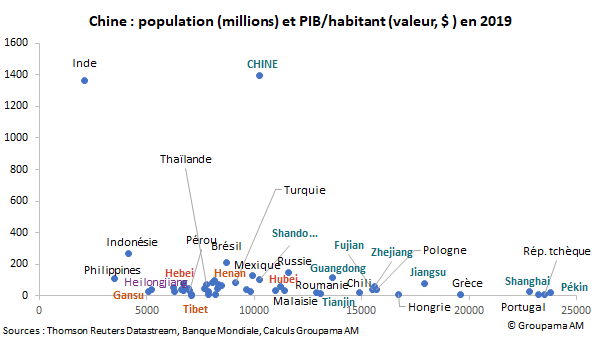 The other big characteristic of the Chinese economy concerns the disparities between the cities and the countryside.. The gap has not really changed since 1990. In 2020, the per capita income of urban populations is about three times that of rural populations. The development strategy in favor of the expansion of export activity has accelerated the development of heavy industry and wage inequality between rural agricultural areas and industrial towns. Added to this is the “hukou” administrative regime which is very discriminatory towards rural populations.. This is the residence permit system that restricts the movement and settlements of rural workers to cities, and creates in fine unequal access to education, health care and social protection between migrant workers and permanent residents in urban areas.

Real efforts have been made by the public authorities in recent years to reduce the income gap between the provinces as well as between the towns and the countryside. Programs to combat inequalities and poverty have been accelerated with the development of the concept of “harmonious society” in the five-year plans. Besides, the fight against inequalities will remain at the heart of new medium / long-term development plans, in particular through two strong strategic axes: reduction of regional disparities and promotion of inclusive growth based on improving the quality of human capital. It will be long and difficult however. On the one hand, the means put in place to reduce disparities remain insufficient in the light of those invested in technological development and ecological transition. On the other hand, Beijing will have to play a delicate exercise: pursue globalization, a source of inequality, to ensure stable growth in order to release the necessary resources for redistribution programs and, at the same time, put in place reforms to promote inclusive growth which is essential to reach the circle of developed countries.

TNT will not change numbering